skip to main | skip to sidebar

Yitro, Our First One 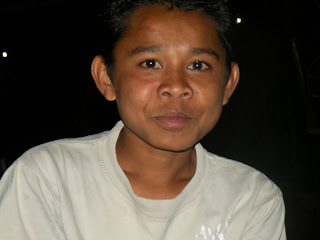 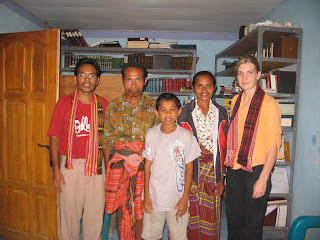 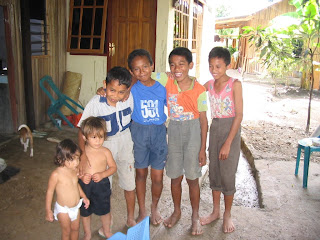 Yitro was born in a small poor village about 3 hours south of Soe. When he was only 2 years old his father died, leaving him and his 3 brothers orphans. His mother worked hard to support her family and was able to send Yitro to primary school ( grade 1-6), after that she could no longer afford to care for him, so she sent her 11year old boy to go into the towns and look for work to help support the family. You need to understand that this is not a rare but a normal occurrence in Timor. If the father of a family dies, the mother and the children, must fend for themselves or be cared for by other family members. Most of the time however the extended family is also suffering financially, so they end up on their own. Well.... Yitro took the long trip into Kupang, and ended up in the suburbs in a town called Bolok. Here he found a job working for a farmer selling apples, earning just enough to buy himself a bowl of rice every day. The evenings and nights he spent with children in the same position as himself. They would sleep on the ferry at nights, and go about their work during the day. These children are forced to grow up very fast and often get into trouble (just imagine 20 12 yr old Canadian boys living on their own), many take up smoking, drinking, and drugs, and never get an education. When we met Jithro, he expressed his desire for an education and a better future. He was in tears when we asked him to stay at New Hope.
1. Jithro has just graduated from Junior High, and is now in his first year of Senior High school, which he enjoys immensely. Every morning at 5 o' clock, Jithro swings his legs over the side of his bed, and begins the day with prayer and personal devotions.
Depending on today's shower schedule, he will go over to the kitchen to check what his morning chore is for this week. The chores vary from cleaning the washroom, mopping floors to cooking rice porridge for breakfast. When the New Hope home looks spotless and the stomach filled, he quickly changes into his school uniform, packs his bag, and set's of for a 20 min walk to arrive in time for his first class of the day which starts at 7 o clock. The school is out at 1.30, and Jithro should be back home at around 2 o clock. By this time his stomach is rumbling, and all sit down for a lunch with ..... you guessed it.....RICE as the main filler. Another check at the “schedule wall” to see if he is on dishes duty for lunch or not, and then off to enjoy an hour of siesta!!! By 3.30 he better be up, or he will find himself and his bed soaked with water!! Did you know that that's a really good way of getting someone out of bed without having to call a hundred times??? It's time for homework! Just before 5 o clock the banana's or another snack depending on the season come around, and then it's... chore time again! Then another shower to get all the dust and sweat washed away, and some of the kid's will have to get ready for Catechism or bible study, depending on the day of the week. They all should be back and gathered around the picnic tables at around 8 o clock, in time for supper consisting of ....yes, more rice!! following the meals we have evening devotions which they all take turns in leading. More dishes after that, finish up on homework, and then the lights go of at 9.30. Unlike schools in Canada, the children in Indonesia go to school 6 day's in a week, despite that and their busy schedule they always find time to play soccer, voleyball, play the guitar and socialize. It is amazing to see these children grow in knowledge and faith. Over the past 3.5 years Yitro has grown from a shy, uneducated little boy, to a smart young man who aspires to become a Pastor one day just like his 'Father” Pastor Ed.
Posted by NEW HOPE TIMOR (INDONESIA) at 8:00 AM

NEW HOPE TIMOR (INDONESIA)
Kupang, Timor, Indonesia
New Hope or “Harapan Baru's vision is that orphaned and abandoned children in Timor may come to trust in the real hope given through our Lord Jesus!   Educating and reaching out   West Timor and surrounding areas are our focus     Health care is provided     Offering a Christian loving family atmosphere   Providing for all daily necessities and creating job openings   Equipping the children with a New Hope for the future in which they in turn can impact the society